Queen Sivagami comes out of a cave that's adjoined to a waterfall, holding a baby. She kills the soldiers who were following her and sacrifices herself to save the baby saying, "Mahendra Baahubali must live!". The local tribe finds the queen holding the baby and the tribe saves the baby. The queen's corpse flows away after pointing towards the mountain above the waterfall. Sanga and her husband adopt the baby and name the baby Shiva. They seal the cave so, no one will come for the child.

Shivdu grows up to be a young and adventurous man who hopes to climb the waterfall but, makes many unsuccessful times. After carrying the Shivalinga to the waterfalls, he finds a mask which falls from the waterfalls. Driven out to find out the identity of the owner, Shivdu climbs the waterfall successfully.

On top of the waterfall, Shivdu discovers that the mask belongs to Avanthika, a rebellious warrior whose group has indulged in guerrilla warfare against King Bhallala Deva.

Shivdu approaches Avanthika when she was on her way to rescue Devasena. Stubborn at first, Avanthika falls in love with Shivdu after she learns that he climbed a waterfall for her. Avanthika gets injured and Shivdu pledges to help her with her mission. Shivdu sneaks into the Mahishmati kingdom.

At the festival [Bhallaladeva's birthday], a gold statue of King Bhallaladeva was being erected by the citizens. When the statue was getting erected, a few tired men who were holding the rope that helped them pull up the statue fell, hence destroying the whole organization the men had made while pulling up the statue.The statue fell and was about to crush 100 workers to death. Shivdu, with his face hidden, holds the rope which was indirectly holding the statue before the statue before it crushes the workers to death. He accidentally shows his face to one of the slaves and the slave recognized him as Baahubali. Everyone starts chanting "Baahubali" which enrages the king.

Shivdu shows his face and rescues Devasena, unaware that she is his mother. Shivdu and Devasena are chased down by Prince Bhadra, Bhallala Deva's only son and Kattappa, who is a skilled fighter and a slave. When Shivdu beheads Bhadra, Sanga and her tribe, Avanthika and her group and the Mahishmati's army comes there Kattappa realizes that Shivdu is Mahendra Baahubali, the son of late King Amarendra Baahubali and Devasena. Kattappa begins to narrate the story from 50 years ago (Baahubali's birth).

After the flashback, when asked about Amarendra's current whereabouts, a tearful Kattappa reveals that Amarendra is dead, and that he is the one who killed Amarendra.

Devasena too arrives to learn of her husband's death with her son, in her arms. Sivagami announces the panicked hordes outside her palace that Amarendra is dead and the baby, Mahendra Baahubali, is the new King. Before fleeing, Sivagami tries to take Devasena with her but, Devasena makes Mahendra promise to come back for her.

As Bhallaladeva and his men are about to seize the queen mother, she flees with baby Mahendra Baahubali. Devasena is taken prisoner for the next 25 years. The Kuntala Kingdom is destroyed completely by Bhallaladeva. The now ousted Kuntala King, leads the rebel group that has indulged in guerrilla warfare against king Bhallaladeva.

Kattappa reminds him that Sivagami had declared Mahendra Baahubali king before her death 25 years back and hence his loyalties instead lie with the rightful king, Baahubali. Bhallala Deva is later defeated by Baahubali and burnt alive on a pyre prepared by Devasena. Ending the cruel regime of Bhallala Deva, Baahubali becomes the new King of Mahishmati with Avantika as his queen, declaring peace and harmony. Devasena becomes the new Queen Mother (rajmatha).

In the end credits, a child is heard asking an elder whether the son of Mahendra Baahubali will become the next king of Mahishmati. To which, the elder replies: "Who knows what Lord Shiva is planning!"

Given that he's portrayed by the same actor, Mahendra has a similar appearence to a younger version of Amarendra Baahubali. He has shorter hair and a mustache which eventually grow, and also has a muscular form. He wears village clothing and later a battle armor.

In many ways, Mahendra has always behaved similarly to his father. While not strict or duty bound, he shares Amarendra's kind heart and has a heavy free spirit and sense of adventure. A notable trait is his ambition for this, which leads to him scaling the mountain and finding Avantika and the Rebel Tribe. He puts his mind to make Avantika happy and rescue Devasena on her behalf. He has also demonstrated a short temper when those he cares about are in danger, and has shown zero hesitance to murder Bhadra when he harasses Devasena.

Mahendra has never met his father, but he has been told about his conflict by Kattappa and takes every step to ensure revenge against his uncle.

Devasena is Mahendra's mother. She was taken prisonor by Bhalla just after Mahendra was born. He returns to Mahishmati 25 years later with no knowledge of who she is. He has a strong bond with her as he has been angered by the thought of her repeated torture and even kills Prince Bhadra for hurting her.

Sanga is his foster mother. Sangra raised him as she has no children and she named him Shivdu. Mahendra believed her as his biological mother. Sanga and her husband live with Mahendra at the palace.

Far unlike Amarendra, who has been oblivious to Bhalla's treachery and has seen him as a kind ally, Mahendra has no reason to like him what so ever. Given the ferocity at which he fights Bhalla, it can be assumed that Mahendra hates him for orchestrating his father's execution. Bhalla similarly despises his nephew for killing his son and rising up to him, and treats his arrival like a special gift to kill Baahubal all over again.

Sivagami is Mahendra's great-aunt. Sivagami sacrificed herself for Mahendra, while Fleeing Mahishmati from Bhallaladeva's clutches.

Bhadra is Mahendra's adoptive cousin. Mahendra kills him when he sees him harassing Devasena.

Kattappa is Mahendra's friend. Mahendra calls Kattappa grandpa and shows the same kindness towards him like his father.

Avanthika is Shivdu's wife. Shivdu finds a mask which falls from the waterfalls. Driven out to find out the identity of the owner, Shivdu climbs the waterfall successfully.On top of the waterfall, Shivdu discovers that the mask belongs to Avanthika, a rebellious warrior whose group has indulged in guerrilla warfare against King Bhallala Deva. Shivdu falls in love with her beauty.

Shivdu approaches Avanthika when she was on her way to rescue Devasena. Stubborn at first, Avanthika falls in love with Shivdu after she learns that he climbed a waterfall for her. When he approached her, Avanthika didn't believe him. Avanthika tries to attack Shivdu but, Shivdu shows her feminine side to her. If you look closely, they were in the ruins of Kunthala kingdom where his parents fell in love. 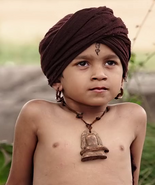