Princess Devasena is a reoccuring protagonist character seen in the Baahubali franchise. She is the younger sister of Jaya Varma and member of the Kuntala royals. She appears as a minor character in Battle of the Bold and a main character in the movies.

Battle of the bold[]

Devasena makes her debut as an apparent competeter in the prince's tournament. She is a guardian and guide in the bird sanctuary in the high mountains where Baahubali sought the Ratnapakshi egg.

On top of the waterfall, Shivdu discovers that the mask belongs to Avanthika, a rebellious warrior whose group has indulged in guerrilla warfare against King Bhallaladeva. The group is led by Jaya Varma, who has intended to rescue a captive and tormented Devasena for nearly 25 years.

Shivdu shows his face and rescues the queen, unaware that she is his mother. Shivdu and Devasena are chased down by Prince Bhadra, Bhalla Deva's only son and Kattappa, who is a skilled fighter and a slave. When Shivdu beheads Bhadra, Sanga and her tribe, Avanthika and her group and the Mahishmati's army comes there. Kattappa realises that Shivdu is Mahendra Baahubali, the son of late King Amarendra Baahubali and Devasena. Kattappa begins to narrate the story from 50 years ago.

Amarendra falls in love with Devasena, a princess of the Kuntala kingdom (7.5 yojanas in the North from Mahishmati) and the sister of the king of Kuntala. Bhallaladeva learns of Amarendra's attempts to woo Devasena and hatches a plot to drive a wedge between Amarendra and Sivagami by asking for Devasena's hand in marriage for himself. Sivagami, unaware that Amarendra is in love with Devasena, promises Devasena's hand in marriage to Bhallaladeva.

Sivagami sends an emissary to the kingdom of Kuntala, who delivers the marriage proposal in a patronizing way. An insulted Devasena rejects the proposal with a scathing reply. Sivagami is enraged to hear Devasena's response and sends an order to Amarendra that Devasena be brought to Mahishmati as a captive.

The kingdom of Kuntala is attacked by Pindaris, a dacoit-like army. Amarendra, with the help of Devasena's cousin, Kumara Varma, is able to nullify the attack and save Kuntala. Amarendra reveals who he is, promises Devasena that he will protect her honor no matter what and convinces her to come with him to Mahismati as his future bride.

Upon reaching Mahismati, the misunderstanding comes to light. When Sivagami delivers an ultimatum to Amarendra that he must either chose the throne or Devasena, he chooses Devasena. Bhallaladeva is crowned king and Amarendra is made the new commander-in-chief. During the coronation ceremony, the citizens of Mahishmati clearly display their preference for Amarendra over Bhallaladeva.

At Devasena's baby shower, Bhallaladeva relieves Amarendra of his duties as commander-in-chief so that Amarendra can be with his wife. Devasena immediately speaks out against the King's manipulation and the mute inaction of Sivagami. Due to further clashes, Devasena and Amarendra are banished from the Palace. Amarendra and Devasena live happily among the people. Kattappa learns of Bhallaladeva's treachery and informs Sivagami. Devasena too arrives to learn of her husband's death with her son, in her arms. Sivagami announces the panicked hordes outside her palace that Amarendra is dead and the baby, Mahendra Baahubali, is the new King. Before fleeing, Sivagami tries to take Devasena with her but, Devasena makes Mahendra promise to come back for her.

As Bhallaladeva and his men are about to seize the queen, she flees with baby Mahendra Baahubali. Devasena is taken prisoner for the next 25 years. The Kuntala Kingdom is destroyed completely by Bhallaladeva. The now ousted Kuntala King, leads the rebel group that has indulged in guerrilla warfare against king Bhallaladeva.

Bijjala Deva tries to brainwash Kattappa reminding him of his forefather's pledge of their allegiance to protect and defend the throne of Mahismati and their duty to be loyal to the king. Kattappa reminds him that Sivagami had declared Mahendra Baahubali king before her death 25 years back and hence his loyalties instead lie with the rightful king, Baahubali. Bhallaladeva is later defeated by Baahubali and burnt alive on a pyre prepared by Devasena. Ending the cruel regime of Bhallaladeva, Baahubali becomes the new King of Mahishmati with Avantika as his queen, declaring peace and harmony. Devasena becomes the new Queen Mother (rajmatha).

In Baahubali: The Conclusion, Sivagami describes Devasena as "putting the very ideal of beauty to shame", upon seeing a portrait of her, which Bhallaladeva commissioned to hang in his wing of the palace. When Devasena first makes an appearance, she is shown with lustrous, long black hair that is half up in a knot and half allowed to hang freely. Her eyes are brown, typically lined with kohl, and is the first part of her Amarendra Baahubali saw (and was possibly smitten by). In concordance with most women of her time, she has her nose pierced, and has a penchant for large nose rings with several clusters of bells hanging from them.

As a princess, she wears a lot of gold jewelry. She wears dull or bright sarees. Living with the people, she wore simple sarees and didn't wear any jewelry.

When she's old, she has gray hair mixed in her hair. She has darker skin and she is not wearing makeup. She has many old scars. She wears a worn, teared saree. When she became rajmatha, she dressed like Sivagami. She wore her hair in a bun and sarees.

Devasena keeps her head high, made her own decisions and was fearless in the face of danger. She was unapologetic about who she was and stayed true to herself. She is feisty, aggressive and upfront. She is brought up to be a strong, brave independent woman, Devasena is no damsel in distress. She’s empowering in every sense. Devasena believes in someone and waits for them to succeed. She waited for 25 years for her son because Sivagami promised.

Jaya Varma is Devasena's older brother. Jaya Varma cares about Devasena and lets her make her own choices. After learning that Devasena is taken in as a prisoner, Jaya Varma forms a group of warriors to save Devasena. He dies for Devasena.

Sivagami is Devasena's mother-in-law. Sivagami chose Devasena to be Bhallala Deva's wife but, Devasena sends a message that enrages Sivagami, who orders her to be brought as a captive. When the misunderstanding comes to light, an enraged Sivagami forces Amarendra to choose the throne or Devasena when Devasena talks back to Sivagami.

At Devasena's baby shower, Bhallaladeva relieves Amarendra of his duties as commander-in-chief so that Amarendra can be with his wife. Devasena immediately speaks out against the King's manipulation and the mute inaction of Sivagami. Due to further clashes, Devasena and Amarendra are banished from the Palace. Amarendra and Devasena live happily among the people.

Devasena too arrives to learn of her husband's death with her son, in her arms. Sivagami falls at Devasena's feet for her forgiveness. Before fleeing, Sivagami tries to take Devasena with her but, Devasena makes Mahendra promise to come back for her. Devasena then witnesses Sivagami being shot in the back with a arrow.

Kattappa is Devasena's friend. Kattappa only wishes that Devasena is freed and feels guilty that she's in chains. Kattappa is on Devasena's side and helps Mahendra win the war.

Amarendra fell in love Devasena when he saw her fighting the thieves. He pretended to be a coward and hid who he was. Devasena was impressed when he was shooting 3 arrows at a time which she wanted to learn how to do. Devasena learns that he loves her. At that exact moment, he gets a message from Sivagami to bring Devasena as a captive to Mahishmati.

An enraged Devasena hits Amarendra with fire and his protective shield comes out. Amarendra reveals that he is the crown prince of Mahishmati and Devasena falls in love with him. Thinking that Sivagami asked her hand of marriage for Amarendra, she felt guilty for rejecting him. Amarendra promises that he will protect her

When the misunderstanding comes to light, Sivagami forces Amarendra to choose between the throne or Devasena. He chooses Devasena. At Devasena's baby shower, Bhallaladeva relieves Amarendra of his duties as commander-in-chief so that Amarendra can be with his wife. Devasena immediately speaks out against the King's manipulation and the mute inaction of Sivagami. Due to further clashes, Devasena and Amarendra are banished from the Palace. Amarendra and Devasena live happily among the people in Mahismati.

Devasena learns her husband's death with her baby, Mahendra in her hands. Sivagami falls at Devasena's feet for forgiveness. 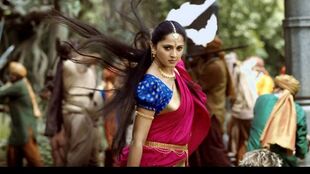 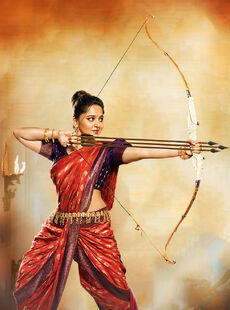